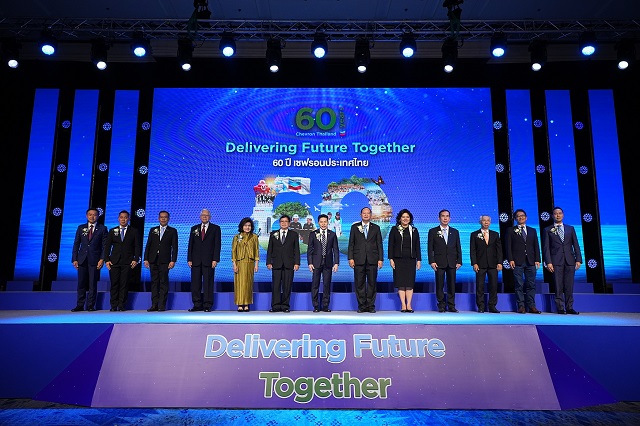 Chevron Thailand Exploration and Production, Ltd. celebrated its 60th anniversary with the theme ‘Delivering Future Together’ at the Infinity Ballroom, Pullman Bangkok King Power, commemorating its significant milestones in petroleum exploration and production in Thailand while thanking stakeholders for their continued support. The company reaffirmed its belief in the power of human energy and partnerships, which has enabled Chevron to strive in meeting the country’s demand for energy security while continuing to serve the society and protect the environment. Representatives from the public and private sectors, as well as partners, attended the event to congratulate the company on this momentous occasion.

Throughout the past six decades of business operations in Thailand, Chevron is committed to its mission to serve and safely provide reliable energy supplies to the Kingdom of Thailand. As a pioneer to discover and produce natural gas in the Gulf of Thailand, the company has contributed to national economic growth and laying a solid foundation for the petroleum industry in Thailand by developing skilled workforce. Over 17.2 trillion cubic feet of natural gas, as well as 1,064 million barrels of crude oil and liquefied natural gas, have been produced (as of August 2022). They are used to generate electricity and fuel for the country’s industrial sector and households. 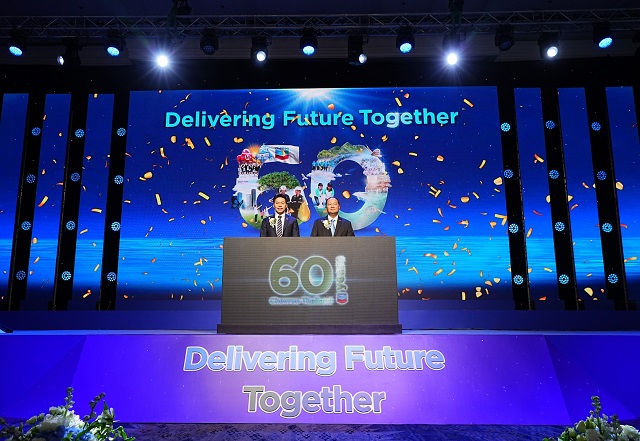 The company’s technological know-how and commitment to human energy, as embodied in its strong corporate culture, are the key strength and differentiator that drive Chevron as Thailand’s energy partner for the past sixty years. The company is ready to move forward into the next chapter with a renewed focus on advancing lower carbon solutions through its enhanced capability to supply affordable, reliable and ever-cleaner energy that would help unlock Thailand’s energy security while delivering on environmental and social expectations. 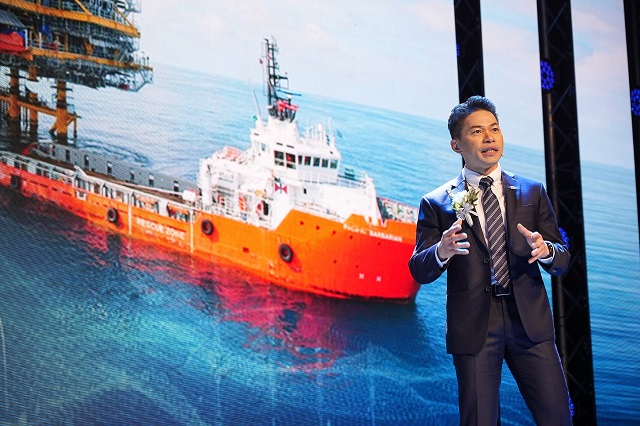 The company’s technological know-how and commitment to human energy, as embodied in its strong corporate culture, are the key strength and differentiator that drive Chevron as Thailand’s energy partner for the past sixty years. The company is ready to move forward into the next chapter with a renewed focus on advancing lower carbon solutions through its enhanced capability to supply affordable, reliable and ever-cleaner energy that would help unlock Thailand’s energy security while delivering on environmental and social expectations.

Chatit Huayhongtong, president of Chevron Thailand Exploration and Production, Ltd., welcomed the guests and reaffirmed the company’s 60th anniversary drive. “Throughout the course of our business operations in Thailand, we are proud of our contribution as a change agent that supports the nation’s energy security, community and social development, while fostering sustainability through hundreds of social and environmental development initiatives. Our accomplishments were possible thanks to a quality that is deeply ingrained in the company’s DNA: determination and the way we work in pursuit of designated goals known as the 3Ps. The first element is People. We care the most about the development of our workforce. We pass on our knowledge to our employees and develop their skills to help them reach their full potential. We are a world-class company managed entirely by Thais, with 99% of our workforce being Thai. We believe in boundless human potential; thus we are devoted to human development in the energy industry and beyond. The second element is Performance. We aim to achieve world class performance by leveraging our sixty years of experience and access to technological and operational excellence from around the world. The final element is Partnership. We have established ourselves as a trustworthy partner for all groups of stakeholders. Chevron’s journey would not have been possible without cooperation from our crucial partners across all sectors. Today we are ready to embark on a new journey in search of yet another opportunity and success. Our ultimate goal in our business journey is to create sustainability in terms of energy, environmental and social.”

Dr. Kurujit Nakornthap, Executive Director of Petroleum Institute of Thailand, presided over the event and delivered the keynote speech to highlight Chevron’s long history and partnership with Thailand. “On behalf of Chevron’s friends and partners, I would like to congratulate the company on its 60th anniversary and express my appreciation for its long-standing contribution to Thailand’s energy security. Throughout my 38-year career as a government official, I have witnessed Chevron’s determination in laying the foundation for Thailand’s energy industry while also supporting the Thai society. The company’s first step was made in 1962 as the first oil and gas company granted a concession for petroleum exploration in Thailand. The company never ceases to develop new technology and innovation that improves drilling efficiency while maintaining safety as the top priority. Now the company has become a leader in the development of exploration and production alongside Thai people. In addition, I have been highly impressed by Chevron’s commitment to improve the quality of life for Thai people through various initiatives. Chevron Enjoy Science is one example. Chevron is the only company to significantly fund the promotion of Science, Technology, Engineering and Mathematics (STEM) education for Thai children. The support for Tham Luang cave rescue is another example. Others include the company’s environmental initiatives. Chevron aims to reduce its carbon footprint in accordance with the country’s energy policy, as outlined in the National Roadmap. Chevron has also been a crucial part of the global community in the collective effort to limit global warming to within 1.5 degrees Celsius, as required by the Paris Agreement. Chevron has ventured onto a successful path by trusting in the power of human energy. As a friend, I truly value Chevron’s role as an energy company which stands by Thailand’s side in the past, present, and future.”

The 'Delivering Future Together' event celebrated Chevron's accomplishments over the past six decades while also emphasizing the company's commitment to moving toward a low-carbon society in accordance with the government’s policy on the transition to clean energy.  Chris Powers, Vice President of Carbon Capture, Utilization and Storage (CCUS) at Chevron New Energies—a business unit supporting low-carbon solutions— joined in with a special presentation on CCUS technology that Chevron implements in the capture of carbon emissions from petroleum exploration and production. With its capability to be scaled up, the technology is a key enabler that supports various industries in their effort to achieve environmental goals.

Chris Powers said, “We believe the future of energy is lower carbon. The world will continue to have a growing need for safe, reliable, and ever-cleaner energies. Chevron New Energies does not only look at the energy transition, but also seek opportunities for energy revolution and continuously set a new bar via three complementary means. First, we keep innovating to reduce the carbon intensity of our operations with CCUS technology whose applications Chevron has already piloted in many countries around the world. Second, we refine our innovations to reduce the cost of implementing such technology in the future. Finally, we accelerate the preparation for supplying renewable energy like hydrogen and geothermal power. In addition, to advance towards success requires enablement from government policies and partnerships across multiple domains with aligned incentives. They are key catalysts for a variety of processes. We therefore collaborate with the private sector and policymakers to ensure wide-scale employment of CCUS technology. Chevron is going all out to become carbon neutral by 2050 and reach Net Zero ambitions by 2065 in Thailand, revamping the world’s energy advancement in the process.” 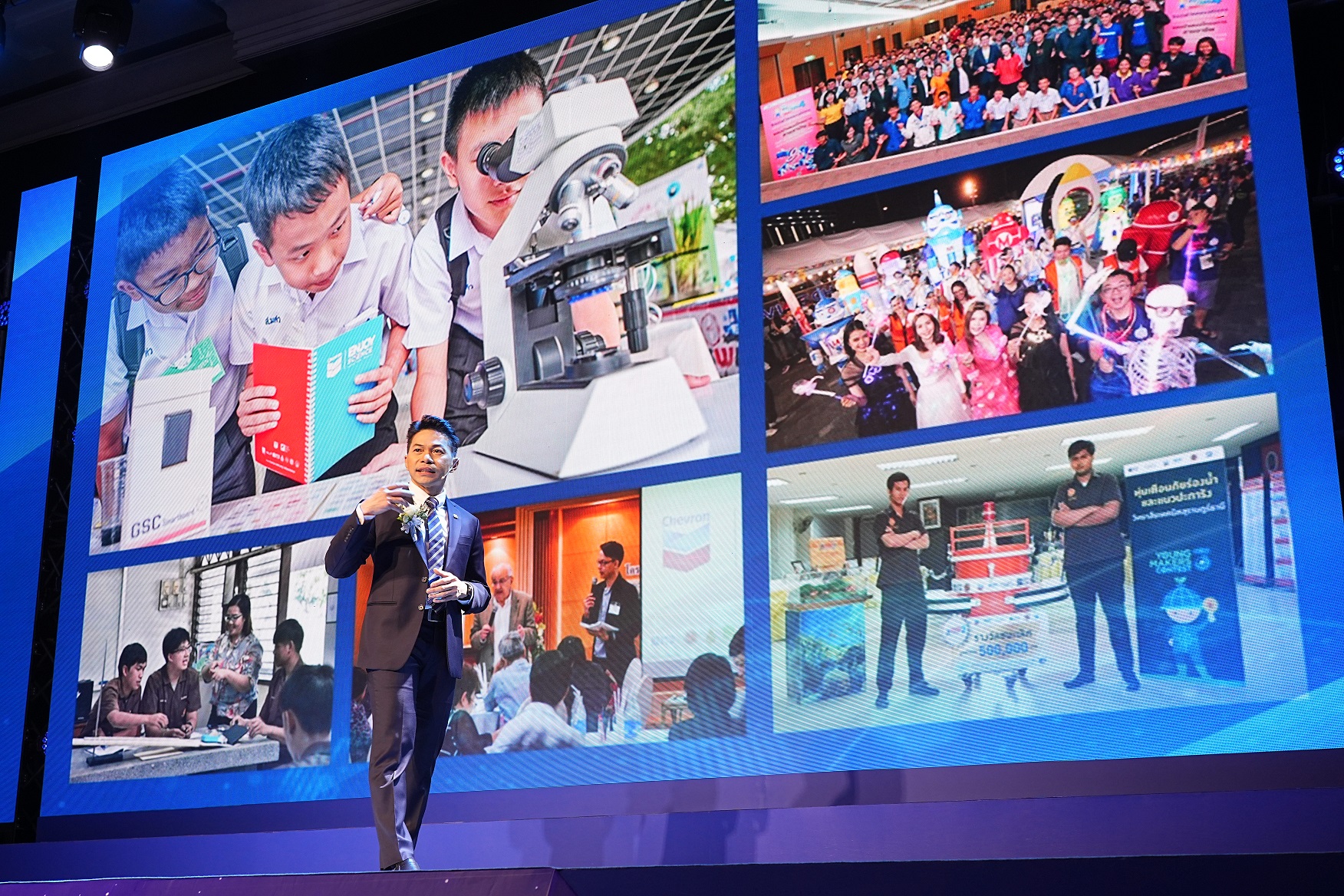 In addition to contributing to Thailand’s energy security, Chevron prioritizes as one of the company’s pillars of operations to support the betterment of Thai people’s quality of life. Chevron has run hundreds of initiatives under its4E’s imperatives: Education, Environment and conserving energy, Economic development, and Employee engagement.

“We are grateful to all relevant parties from all sectors who have helped Chevron reach the 60-year milestone. As we embark on our journey into the next decade, Chevron will remain relentless in our commitment  to energy development that is safe, reliable and ever-cleaner to support the country’s development and help drive the economy sustainably. We have set our greenhouse gas emissions reduction target from our operations to net zero by 2050. As a representative of the company, I am ready to work together with partners from all sectors in support of every phase of Thailand’s energy industry transition towards achieving energy security together,” concluded Chatit Huayhongtong.

The ‘Delivering Future Together’ event marks a new chapter for Chevron. To celebrate this important milestone, Chevron has launched the commercial ‘60 years of Chevron Thailand’—telling of our commitment to powering human energy, and the stories of beneficial contributions the company has made as a trusted partner of the Thai society the entire time— which can be viewed at https://www.youtube.com/watch?v=L0ucZsYgdDI.

To celebrate its 60th anniversary, Chevron Thailand will organize ‘Together We Run’, a charity run/walk event on Saturday 17 December 2022 from 5 a.m. to 9.30 a.m. at Wachirabenchathat Park (Rot Fai Park), with a mini concert from Moderndog. Application is now open to all interested parties. Registration revenue without deduction of expenses will be donated to Siriraj Foundation for children with genetic disorders. In addition, Chevron will donate six times the registration revenue of those participating in the event on top.