The activity was joined by approximately 400 volunteers from Agri-Nature Foundation and A Journey Inspired by the King Facebook page followers as well as staff of Chevron Thailand upstream and downstream operations together with employee of Star Petroleum Refining PCL.

“The Power of Human Energy: A Journey Inspired by the King” project continued its 8th year with an “Aou Mue” collaborative farming session, gathering more than 400 volunteers to create the “Kok Nong Na Kha Wang” model pilot farm in Baan Pho District, Chachoengsao. The farm will integrate the Kok Nong Na model, the self sufficiency farming concept devised by the Late King Rama IX, with ‘Na Kha Wang,’ a local farming method unique to the area. The farm will provide hand-on knowledge to farmers in nearby areas on how to apply the technique in their own lands which will help restore fertility and abundance to the Bang Pakong river basin. The river basin is regarded as Thailand’s prime food source that contributes to the nation’s sustainable food security. Given the New Normal, health and safety measures were also strictly enforced at the event.

“The Power of Human Energy: A Journey Inspired by the King” is a long-standing partnership between Chevron Thailand Exploration and Production, Ltd., Institute of Sufficiency Economy, Agri-Nature Foundation, King Mongkut’s Institution of Technology Ladkrabang (KMITL), and other partners from all sectors, including the public and private sectors, the academia, the public, and media. The program was established to communicate and implement the Late His Majesty King Bhumibol Adulyadej The Great’s philosophy in the management of soil, water, forest, and human resources. Now in its 8th year, the project continues with “Overcoming Crises with The Late King’s Philosophy” concept.


Dr. Wiwat Salyakamthorn, chairman of World Soil Association and advisor to the Agri-Nature Foundation, explained the geographical significance of Chachoengsao Province that, “Chachoengsao Province spans 5,351 square kilometers, or 3.3 million rai, and it sits on the Bang Pakong river basin, which is considered the country’s prime food source. Naturally abundant with lush, fertile soil, the Bang Pakong River’s currents have long contributed to the deposit of silt on both riverbanks, before the water passes through the Gulf of Thailand and form an estuary at Bang Pakong District. Most of the populace engages in agriculture, including farming rice, growing crops and tending fruit orchards. Farmers in Bang Pakong District of Chachoengsao have been managed their lands under the province’s distinctive 3 water ecosystem through the use of the local farming method called Na Kha Wang which is now gradually disappearing.

“The Na Kha Wang rice farming method involves farming in the 3-water ecosystem, namely the fresh water, the brackish water and the salt water. Incorporating knowledge of tidal currents and geographical limitations, local farmers learn to farm rice in the rainy season and divert the salt water into the fields during the drought season to farm shrimps, shellfish, crabs and fish. The method is executed with water courses called “Kha Wang” around the rice fields.”


Artit Krichphiphat, business support general manager, Chevron Thailand Exploration and Production, Ltd., added that, “This Aou Mue activity was joined by approximately 400 volunteers from Agri-Nature Foundation and A Journey Inspired by the King Facebook page followers as well as staff of Chevron Thailand upstream and downstream operations together with employee of Star Petroleum Refining PCL. The volunteer squads joined forces to create a Kok Nong Na Kha Wang natural farming model at the rice field owned by Chatchawan Kasemsook in Tambon Khlong Baan Po in Baan Po District of Chachoengsao Province. Together, volunteers dug field ditches, planted vetiver grass, planted crops using the ‘3 Forests, 4 Benefits’ principle, propagated vegetable seeds, fertilized the soil and released small school of fish of various species back into nature. We truly hope that this model of Kok Nong Na Kha Wang natural farming, which is the first of its kind in Baan Po District, will become a learning center for farmers in the area and inspire them to apply the Koke Nong Na Kha Wang model in their own lands which will sustainably improve their quality of life.” 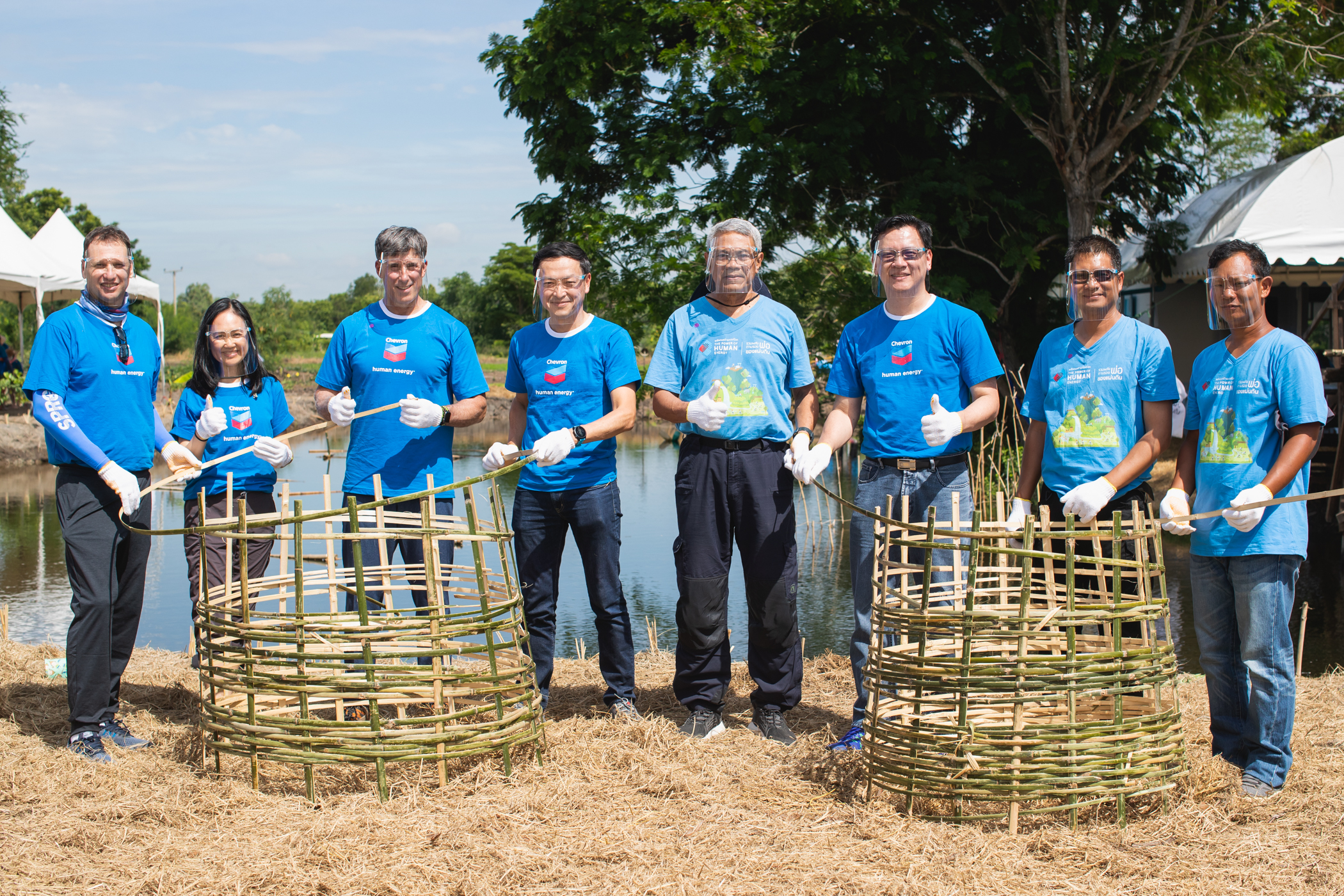 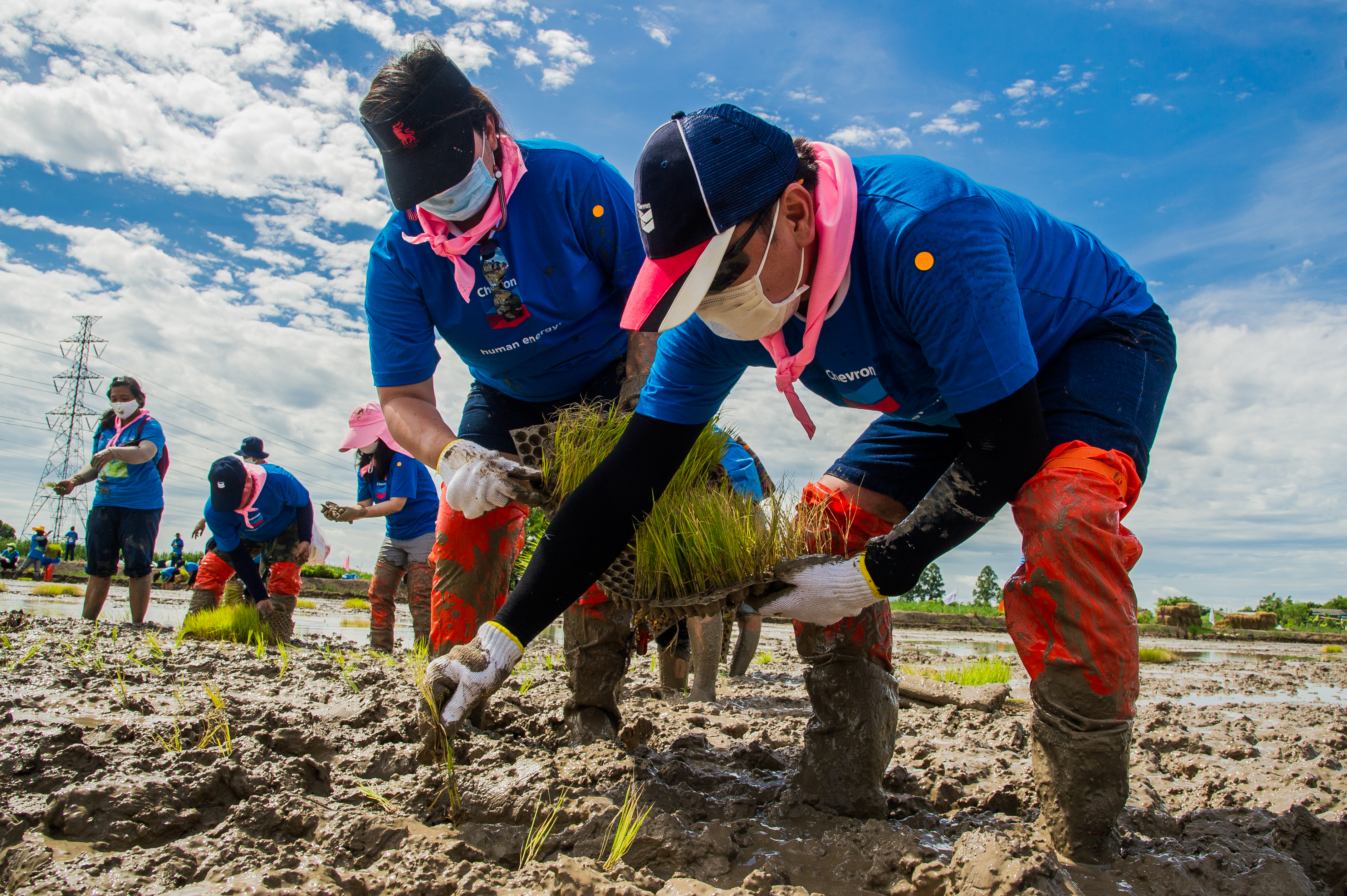