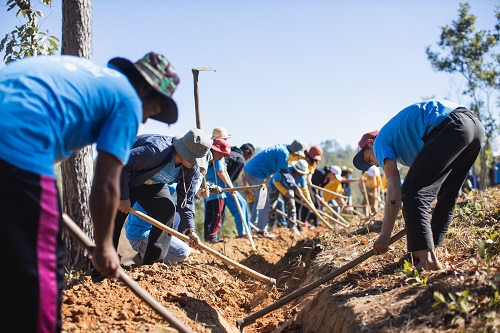 “The Power of Human Energy: A Journey Inspired by the King” project continued its 8th year by organizing training sessions and collaborative farming activities “Aou Mue” in Lopburi, Chaiyaphum, and Chachoengsao, under the “Overcoming Crises With The Late King’s Philosophy” concept. The activities aim to instill knowledge and spark public awareness in preparation for floods, draughts, and other emergencies, by introducing various success cases of those who applied the King’s Philosophy at time of crises to inspire the young generations. In the light of New Normal, health and safety measures will also be enforced at all events.”

“Two thousand twenty marks the eighth year of “The Power of Human Energy: A Journey Inspired by the King,” a long-standing partnership between Chevron Thailand Exploration and Production, Ltd., Institute of Sufficiency Economy, Agri-Nature Foundation, King Mongkut’s Institution of Technology Ladkrabang (KMITL), and other partners from all sectors, including the public and private sectors, the academia, the public, religion, and media. The program was established to communicate and implement His Majesty King Bhumibol Adulyadej The Great’s philosophy in the management of soil, water, forest, and human resources.


Dr. Wiwat Salyakamthorn, chairman of World Soil Association and advisor to the Agri-Nature Foundation, explained, “This program is currently in the third phase of its nine-year plan. The first phase was focused on building foundation and creating awareness, the second was to build human resources, trainers, and tools for a life-long learning, and this last phase is to connect the entire network that we have built in the past years to make tangible changes in the policy level, uplift our competitiveness, and ensure sustainable food security in the long run. Human capital is the key to sustainability. That’s why our program has been focused on developing people within our networks to lead our movement.”

“Unity Is The Power of Thais,” was the Late King’s New Year wish to his people in 2004. In the card, His Majesty also drew four bombs surrounding our nation, symbolizing the four crises we faced – environmental crises of pandemic, draughts, and hazes, economic crisis, social inequality crisis, and political crisis. His Majesty The Late King’s accurate prediction of our current situation has stamped a much pressing needs for Thai people to change their ways of lives by adopting the sufficiency economy philosophy. By building self-sufficiency, we are building a pathway to overcome any crises.”

“Artit Krichphiphat, business support general manager, Chevron Thailand Exploration and Production, Ltd., said, “With the COVID-19 pandemic, Chevron’s A Journey Inspired By The King project Year 8 fully supported social distancing by organizing our activities online, with an aim to inspire the public to apply the Late King’s Philosophy to cope with the pandemic, between March and June 2020 . The previously strict government measures against COVID-19 was proven successful and now loosened up for New Normal lifestyle, allowing Chevron to provide on-ground training and collective harvest activities to truly bring the Late King’s Philosophy to the communities which over the past seven years, more than 20,000 people participated in the program. Concurrently, we will continue to utilize the program’s online platforms to reach a wider group of audience especially the new generations.


The on-ground activities will start with Crisis Management Survival Camp, titled “CMS: Fight, Stay, Escape With The Late King’s Sufficiency,” at the self-sufficiency economy community’s learning center in Lopburi province. In this three-day training, the participants will learn how to overcome emergency situations by using the Late King’s Philosophy.   This will be followed by two collective harvests ‘Aou Mue’. First harvest will be held at the self-sufficiency learning center in Chaiyaphum province which was established by Narong Woonsiw, the former governor of Chaiyaphum and current governor of Phuket to promote and raise public awareness of  the Late King’s wisdom of self-sufficiency and sustainable farming. The second gathering will be held at Kok Nong Na Kawang, Chachoengsao. ‘Kawang’ is the concept of digging moats around rice fields as a water management approach of Bang Pakong farmers. Because the fields are located on three-water ecosystem (fresh, brackish, and saltwater), farmers therefore farm their rice during the rainy season and farm seafood during draughts. The second harvest will also feature a cycling event between Kok Nong Na Mahanakorn (Nongjok) to Kok Nong Na Kawang, Chachoengsao. In addition, Joh Jai TV program will also feature our story in December 2020 on MCOT HD.”

For these on-ground activities, the project has prepared PPE equipment, such as face masks, face shields, fabric gloves, rubber gloves, liquid alcohol, alcohol gel, and disinfectant spray in the accommodations and gathering areas. Social distancing will also be enforced.

For those who are interested in “The Power of Human Energy: A Journey Inspired by the King,” please visit https://ajourneyinspiredbytheking.org