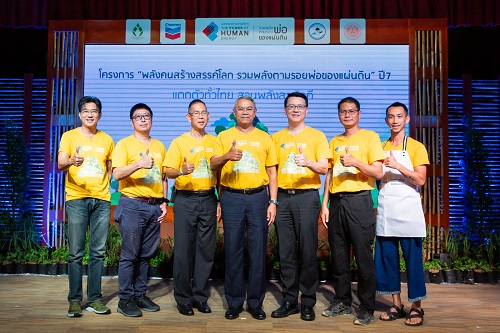 Bangkok – 20 June 2019 – Forging ahead for the seventh consecutive year, “The Power of Human Energy: A Journey Inspired by the King” project continues through with the collaboration between Chevron Thailand Exploration and Production, Ltd. and the Institute of Sufficiency Economy, the Agri-Nature Foundation and King Mongkut’s Institute of Technology Ladkrabang (KMITL) based on the “Reinforce the Power of Unity Nationwide” concept. This year, the  activity will be held in Loei’s Phu Luang district to rehabilitate the Phetchabun Mountain Range that is the headwater zone of not just Pa Sak Watershed but also many other major waterways. All of them have been nurturing Thais in the Central region as well as the Upper Northeast for many decades.

The Power of Human Energy: A Journey Inspired by the King” project aims to make people recognize the importance and the practicality of His Majesty King Bhumibol Adulyadej The Great’s (King Rama IX) Philosophy in improving quality of life; solving problems about soil, water, forest and humans; and sustainably preventing of floods and droughts in the Pa Sak Watershed. The project applies and implements the late King’s philosophy in a tangible manner.

Wiwat Salyakamthorn, deputy minister of Agriculture and Cooperatives, said, “The Late King’s philosophy had been developed through his studies, experiments and real work throughout his lifetime. He granted this philosophy to Thais and people all around the world as a sustainable solution to problems in all aspects. The Food and Agriculture Organization (FAO) therefore has honored the Late King by designating December 5, his birthday, as the World Soil Day. FAO has also established the Global Soil Partnership Assembly, the Asia Soil Partnership Assembly, the Thai Soil Partnership Assembly, and the Center of Excellence for Soil Research in Asia (CESRA) for three main causes that resonate with the Late King’s intention. Firstly, the first objective is to address Soil Pollution by promoting organic farming and ending the use of hazardous farm chemicals. Secondly, they aim to tackle Soil Erosion because it is a cause of casualties and property damages. Thirdly, to promote Soil Diversity leads to ’3 Forests, 4 Benefits’ principle”.

“After developing the project for 6 consecutive years, our project has already expanded significantly. It can be said that our project has already reached national and global levels. In our 7th year, we have received cooperation from seven sectors namely the government sector, the academic sector, the people’s sector, the private sector, the civil sector, the religious sector and the media sector in boosting our project’s competitiveness, laying down a foundation for human development, rehabilitating natural resources at the river-basin level, and connecting 25 watersheds together,” he continued.

Artit Krichphiphat, business support general manager, Chevron Thailand Exploration and Production Ltd., said, “Chevron is proud of our role in driving this project and achieving its success. Chevron has led its staff and partners in activities that carry on the royal aspiration of His Majesty King Bhumibol Adulyadej The Great. The implementation of the project over the years has delivered tangible development results providing proof that the King’s Sufficiency Economy Philosophy and New Agriculture Philosophy are practical. When combined with local wisdom, they restore abundance in drought-hit areas, remove farmers’ debts and improve farmers’ lives. Importantly, they are sustainable solutions to both economic and social problems. Chevron therefore is determined to continue our support to this project in the hope that it will finally cover all 25 watersheds across Thailand.

“He added that the project, after all, has resonated with Chevron’s social investment goals of human development, knowledge creation, and the promotion of conscience. The project, moreover, supports Chevron’s  social investment cornerstones in four following aspects. On the educational front, the project distributes the King’s philosophy for practical use. On economic development, the project helps improve farmers’ lives and boosts their self-reliance. On environmental protection, the project contributes to the soil, water and forest rehabilitation. This project also nudges Chevron’s employees volunteerism into carrying out activities for public benefits. On top of this, the project is in line with many of the United Nations’ (UN) 17 Sustainable Development Goals (SDGs). For Zero Hunger goal, this project seeks to develop a secure and safe source of foods in local areas. For No Poverty goal, this project curbs household debts.

Traiphop Khotwongsa, chairman of the Agri-Nature Foundation and representative of the Institute of Sufficiency Economy from the academic network, said, “ the collaborative farming activity or ‘Aou Mue’ activities are our strategic tactics. In line with Thai traditions, these activities have helped drive our implementation in pursuit of the goal that this project will cover 25 watersheds across Thailand. In the 3rd phase, our project has strengthened both in terms of depths and breadth on the basis of unity, human development and river-basin rehabilitation. We have been urgently producing leaders and empowering them for the role of river-basin generals. Our foundation’s team has increased field trips to monitor operations of learning centers. If they have any problems, we will provide assistance. Learning centers can be compared to fighters on battlegrounds, so they must be well-prepared and receive support. Our efforts will strengthen unity in expanding rehabilitation efforts to all watersheds in order for all to become self-reliant and sustainable”.

The latest collaborative farming activity was held for the rehabilitation of Pa Sak headwater forest in Loei’s Phu Luang district. Chaiwat Chuenkosum, Loei governor, said, “Loei sits in the upper part of the Northeast. Covering mainly mountainous areas, the province is the origin of many important waterways such as Loei Headwater, Namphung Stream, Namphong Stream and Huang River. Loei spans over 6,562,289 rai of land.  A total of 2,119,436 rai or about 32.30 per cent of the province are forests. Ongoing trends suggest that forestland neither shrinks nor increases. This reflects that no serious forest encroachment occurs. Also, it means that if we successfully encourage people to grow more trees on their plot of land based on economic-crop woodland, Loei will have more green areas while locals will have another means of livelihoods.

“The Loei provincial authority assigned the Loei Natural Resources and Environment Office, the Phu Luang District Office, the Loei Wang Sai Sub-District Administrative Organization, and the 9th Loei’s forest protection unit, to supervise the collaborative farming activity on Sawaeng Dapa’s plot of land in Ban Si Charoen, Loei Wang Sai sub-district, Phu Luang district, Loei province, alongside the team from the Agri-Nature Foundation. This land plot used to be part of the Phu Luang Forest Reserve and Phu Hor Forest. But the Royal Forest Department has given this land plot to the Agricultural Land Reform Office, which allocates it to Sawaeng. Media members were invited to watch the collaborative farming activity on Sawaeng’s plot, before they were brought to the Pa Sak Headwater and to the Sak Nga Viewpoint in Ban Hinsor, Pla Ba sub-district, Phu Rua district, Loei province;.

Moreover, a campaign has been launched to encourage people to take part in the conservation of natural resources and environment. Participation in the campaign will also reflect the unity among Loei residents. Held in collaboration with the Loei Bicycle Club, Loei Municipality’s mayor Samphan Koonthaveelabphon will hold a bicycle caravan on 1 August 2019 to campaign for the conservation. Covering a 45-km-long stretch, the caravan will start in Loei’s Mueang district and conclude in Wang Saphung district. People and bicyclists are cordially invited to the join the campaign.

Asst. Prof. Pichet Sowittayasakun, acting director of the Integrated Technology Operation KMITL (ITOKmitl) from the academic network, reported on the progress of the ‘Thai Social Geographic Design: Monitoring and Assessment for Participatory Local Water Management’ that field trips had already been made to gather information. He continued that designs were then prepared and actual areas were improved based on the Sufficiency Economy Philosophy and the New Agriculture Philosophy in a systematic manner in line with academic standards. Data from the project were analyzed in economic, social and environmental aspects. The project initially covered about 300 rai of land, belonging to 30 participants, in Udon Thani’s Na Riang district, Tak’s Mae Ramat district, and Lampang’s Mae Hang district. However, because the project has attracted huge interest from locals, the area coverage has expanded to cover 400 rai of land and 40 participating land owners. Under this project, ITOKmitl has already submitted some soil information from more than 300 samples to the Land Development Department for more detailed examination. Results of the examinations are given to ITOKmitl in March 2019, after which they are being processed into research findings.

“Research findings are not just in the forms of statistical figures. We can also determine the success of the project based on social, economical and environmental results. One of the key factors surrounds people. At the heart of the project is human development. After all, we have been increasing the number of people who have the heart to pursue the causes we promote. For example, in Udon Thani’s Na Riang district, we have already set up a training center and conducted three rounds of training. Each round has 100 participants. So, we have already trained 300 people there. In Huai Krathing in Tak’s Mae Ramat district, our training center has already trained two batches of participants. Although we have not had a training center in Lampang’s Mae Hang district, we have scored success in training people individually. On top of this, our network has reached out to many other provinces such as Nan, Phayao, Phrae and Sukhothai to train locals about useful designs. As each area has a different social context, it is not possible to use the same set of success indicators for all areas. But on the overall, we have already achieved satisfactory results,” Pichet said.

The 7th Year of “The Power of Human Energy: A Journey Inspired by the King” project has now continued to promote the application of King Rama IX’s philosophies by organizing events throughout the year including: